Volkswagen started with the Beetle, and although the iconic compact car has been subjected to a number of changes through the years, it is still one of the most recognized vehicles on the market. At Volkswagen of The Woodlands, we have a wide variety of models of the 2015 Volkswagen Beetle in The Woodlands TX, and if you are looking to get behind the wheel of this piece of automotive history, there is now nothing that stands in your way of doing so.

As we said, the Beetle has undergone quite a few tweaks in its nearly eight-decade-long history, but all of those changes were made for the better. They have helped to provide the modern-day Beetle with a set of skills that are quite unlike any other vehicle currently offered. As you would expect, it does hold onto some of the things that are unique to it, such as the iconic shape that helps to make the Beetle so memorable.

Other aspects of the original Beetle—known back then as the Type 1—such as the air-cooled engine in the rear, rather than the front of the vehicle, have been scrapped for a more modern approach, but those are the changes that have helped to better the compact car. It’s a claim backed by a closer examination of the performance of the Beetle. Believe us when we say that its capabilities may truly surprise you. 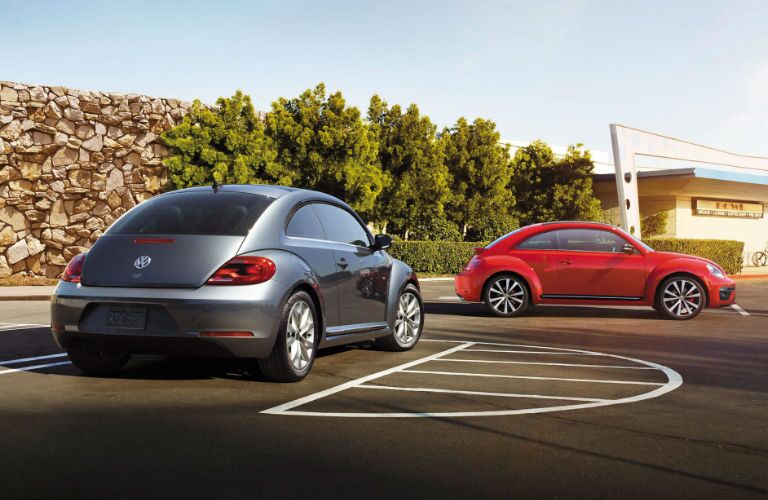 Performance of the 2015 VW Beetle

The Beetle is known for its style, but form is not its only focus. Function has also been highly considered in the design of the compact car, and with a number of different engines to choose from, the functionality of the Beetle is completely up to you. It doesn’t matter what you’re looking for either. Whether performance, efficiency or a mix of the two is at the top of your priority list, the Volkswagen Beetle has you covered.

One of the benefits of the Beetle powertrain options is that you have diesel- and gasoline-powered options to choose from. The former can provide you with unrivaled fuel economy and a surprising amount of power, and the latter can provide you with the balance of performance and economy that we mentioned. At its most efficient, the TDI Clean Diesel-equipped Beetle is able to travel as far as 31 mpg in the city and 41 mpg on the highway. If it’s power that you’re after, the turbocharged 2.0-liter four-cylinder is your answer. The engine can produce as much as 210 horsepower, which gives you the oomph you desire.

Get the VW Beetle in The Woodlands TX

Despite the fact that the VW Beetle is considered a compact car, it has plenty of space for as many as five passengers. As the engine is now located up front, the back is vacant for all of your cargo. Inside, there are comfort, convenience and entertainment features such as a panoramic sunroof, premium audio system and VW Car-Net connected car features that help to deliver a one-of-a-kind experience for both drivers and for passengers. Trust us when we say that you have never seen the Beetle quite like this.

If you are interested in taking the next step, we encourage you to check out our new car inventory and schedule a test drive of the Beetle of your choice here on our website. We have a few models to choose from, and can assure you that we have one that is capable of suiting your needs. Plus, it doesn’t matter whether you seek a gas or diesel engine, the iconic styling that has helped to distinguish the Beetle over the years is ever present, and all you have to do to make it your own is let us know that you’re interested.